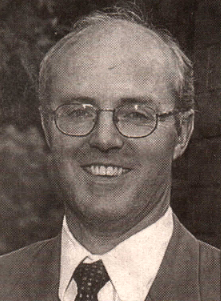 Ten years ago today Polygon Homes Executive Vice President Rick Genest was tragically killed when a boulder fell on his car while driving to his summer home in Bridge Lake, BC. In the 45 years of his life leading up to that point, he rose from humble beginnings and ultimately became, as the Greater Vancouver Home Builders’ Association put it, “One of the development and homebuilding industries’ greatest visionaries and innovators.”
Author’s Note: In growing up with his son Joe, I was fortunate enough to get to know Rick during my teenage years. We shared many laughs at each other's, and Joe's expense. In celebrating the anniversary of his passing, here are some moments, words, and images from his life you may find inspiring.

Rick Genest was born on November 29, 1956, to parents Joe and Mary in Victoria, BC. He was the youngest of three children (siblings: Tony & Cheryl). The family lived in Cranbrook, BC, in their early years. Once while learning to walk, Rick disappeared without a trace. He was found hours later, observing a construction site.
During his youth he developed a strong passion for life, and especially sports such as rugby, baseball, and water skiing. He was very competitive and always upbeat, on and off the field.
After high school, Rick attended the University of British Columbia’s Urban Land Economics program, and drove a taxicab to support his education. Before graduating in 1980, he met the love of his life, Marie, whom he married and had four children with (Natalie, Joe, Chelsea and Dave).

Between 1980 and 1985, Rick began selling commercial real estate in greater Vancouver, initially working with the firm now known as Colliers. While learning the concepts of commercial land assembly, he met and pitched an idea to Michael Audain, Chairman and founder of Polygon Homes---a modest residential real estate development company at the time.
Rick’s thoroughness and spirit made such an impression on Audain that Polygon hired him full time in 1985.
After two years of employment with Polygon, in February 1987, Rick documented the formula for his growing success on a sheet of scrap paper, calling it, “Rick’s Rules for Business”. 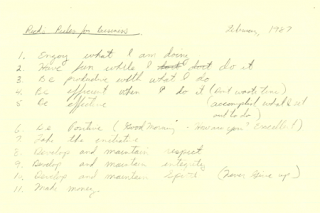 His rules are as follows:
In the early 1990's, Rick was offered the opportunity to buy into Polygon and become a partner. Vancouver real estate tycoon Milan Ilich, a close friend and mentor of Rick's, generously stepped in to finance his share purchase, just as the company was taking off.
In 1996, Rick moved his young and growing family into their dream home in West Vancouver. To the delight of his children, he had a vending machine installed inside---but always insisted they work hard to earn quarters to enjoy the soda, and additionally told them to always ask store owners for the “good guy” deal.
Rick stayed true to his blue collar roots until the very end. 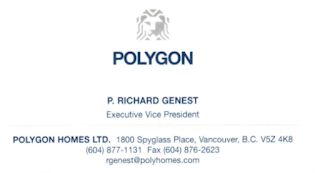 At work, Polygon Homes continued to grow. By 2002, they had built over 10,000 homes (That number now is over 20,000). The company, with the help of Rick’s vision, was becoming the province’s leading home builder. Not just in terms of volume of product, but in terms of quality standards as well.
However, on August 23rd, 2002, his time was cut short while driving with his daughter Natalie to the family’s vacation home.

Rick’s funeral was held August 30, 2002, at Christ the Redeemer Catholic Church in West Vancouver. It was the biggest memorial your author has ever seen, with standing room only. The procession was structured, formal, and intensely emotional.
In delivering funeral remarks, Rick’s friend, mentor, and boss, Polygon Chairman Michael Audain OC OBC said: 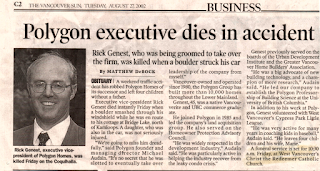 “He was a man full of BIG enthusiasms. He was usually always optimistic. You could see it in his eyes. If he was interested in something, he would go all the way to learn about it as much as possible. He did this when our company went through the leaky condo crisis by urging us to ensure that we research the cause of what happened and then learn new technology to build our homes.”
“[Rick] was truly a leader in the homebuilding industry.”
“I believe that [Rick] must have also had a BIG brain, because he was a very intelligent man. As you perhaps know too well, he was particularly good at negotiating. He always believed that there was a way to do a deal to the mutual benefit of both parties. In fact, he was so good that when you were dealing with him you often didn’t realize that you were being negotiated with!”
“In all the years that we were together, we never had a disagreement which lasted beyond twelve hours. If we weren’t together at the end of the day, we always fixed it the next morning. When one of us made a mistake there would be no recriminations.”
“Finally, if you don’t mind, I want to share something with the folks here about [Rick’s] very private side. I remember being at a housing conference in San Francisco with him 12 years ago. On the flight home, I asked [Rick] if he had learnt anything from the various speakers. I distinctly remember that he turned to me and said, “Yeah. I really liked the guy from Fieldstone Communities in San Diego and his recipe for success in our business.”
“What was it?” I asked.
“Well, not just the usual stuff”, [Rick] said, “Like the need to have integrity and to work hard - I know that, but you hear it all the time. What I especially liked were two other things he mentioned. The first was to always have some lucky dice in your pocket and the other was a firm belief in God.”
"That was Rick Genest.”

Beyond a career in real estate, Rick is remembered for championing the Cypress Park Little League, and as proprietor of Moondance Bay Resort in Bridge Lake, BC. Shortly after his passing, the Rick Genest Baseball Diamond at Cypress Park in West Vancouver was dedicated to him (Google map). Additionally, his alma mater, UBC, named a beautiful park after him, along with an annual Memorial Service Award in Building Science (details).
Forced to accept the circumstance, Rick’s immediate family eased their pains with fond memories of their late and great dad. Each of them are succeeding today.