Tommy Humphreys was born in North Vancouver in 1985 to a loving stockbroker dad and media personality mom. He is the youngest of three children.
By age 12 Tommy was an active caddy and junior golfer more at home on the course than at high-school where he was struggling to fit in.
After his parents' split, Tommy asked to spend grades 10-11 at Brentwood College School on Vancouver Island. There he benefited from excellent academic instruction and an expanded worldview.
Grade 12 back home in Vancouver was a bust. Essentially a big party. He barely graduated with a Dogwood diploma in 2003.
A mailroom job and administrative work at a couple financial firms after high-school stoked Tommy's impatience for personal success.
He started making web sites for baby boomers because they had the money and he wanted some. Tommy founded Visual-Edge Marketing Systems, the predecessor of PacWebCo in 2006 and began selling web sites on his lunch breaks and after work. Internet consulting work took off and by 2007 Tommy was a full-time entrepreneur with a small team building custom brand packages and web sites.
A 2010 cash-flow crunch caused Tommy to refocus his business on the venture investment industry, where he'd heard of a lot of success stories. He consulted with Cambridge House, a leading investment conference company, saving up to start his own site, combining passions for the stock market and the internet.
Friends had sweet-talked the Consulting Engineers of Ontario to part with the CEO.CA domain and in Spring 2012, they sold it to Tommy for a small cash (and gold) infusion. CEO.CA (and Tommy) quickly made a name for itself by frantically interviewing CEOs and working hard for access.
At the PDAC mining convention in Feb 2014 for example, Humphreys cornered mining mogul Robert Friedland on an escalator and convinced Friedland to host CEO.CA at its Congolese and South African mining projects later that month in what became a popular story.
Another interview subject, Canadian business and philanthropic legend Frank Giustra, took Tommy under his wing and invited him to co-invest in certain resource projects.
One of these ventures paid off and helped Humphreys invest to expand the team of CEO.CA. Critically, he was able to recruit Murat Ayfer to build community and market data software which quickly took off.
Giustra, Humphreys and others helped create new public companies in the mining space such as Fiore Gold (acquired in 2021) and Lithium X Energy (acquired in 2018). In 2017 they launched the world's first listed cryptocurrency miner, HIVE Blockchain. It had a market capitalization of over $2 billion within six months and today trades on the NASDAQ stock exchange as a sector bellwether. Tommy was a key driver of this deal. He also came up with HIVE's brand and produced its web site, a throw back to his early days.
Humphreys married long-time girlfriend Chelsea Frazer in 2018 and they have two daughters, Rosie (born 2020) and Annabel (born 2021) keeping them busy today.
In 2021 GoldSpot Discoveries, a mining AI firm backed by gold magnate Eric Sprott, approached Humphreys to acquire CEO.CA, and a deal was announced August 16. GoldSpot wanted to expand its footprint in SaaS businesses and into financial media, and said at the time that CEO.CA had become "like a town-square of mining" which complimented its existing businesses. Tommy is enjoying helping GoldSpot transition and grow CEO.CA as of early 2022.
Some success has helped Tommy strive for greater balance, persueing health and writing for pleasure in recent years.
He is grateful for his journey and looking for new opportunities for the next chapter.
Follow Tommy on Twitter @TommyHump
More PacWebCo history... 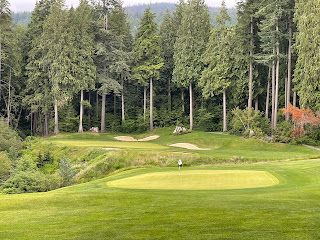 Mom asked me to caddy in the final round of the Ladies Club Championships at #CapilanoGolf today. It didn’t go as planned. What happened next was a rollercoaster of emotions and a critical life lesson. Shanny, as we call her, is in her 67th year, and has been a golf-freak since she picked up the game 25 years ago. My siblings and I caught her obsession by osmosis. Golf is the thing we do together.  Shan is a super senior. She has never won a club championship before and did not expect to be in contention with women half her age. In fact the opposite. We joked before the round that we would show ‘em how to lose with dignity.  It’s terrifying to golf competitively when you’re not used to it. Like watching the 8th grade dance, trying to garner some courage. Your stomach churns and heart pounds uncontrollably.  I’ve choked every time I’ve ever played competitively. The consensus is we are a choking family While warming up at the course this morning, a competing player’s father approached m
Read more