Mum asked me to caddy in the final round of the Ladies Club Championships at Capilano Golf & Country Club today. It didn’t go as planned. What happened next was a rollercoaster of emotions and a critical life lesson.
Capilano is a storied 84 year old private course in West Vancouver's British Properties. My grandfather Reg joined in 1966 and we Humphreys have been grateful members since. Each year at the Ladies Championship event, the club's best women golfers of all ages compete for the lowest combined score over two days.
Shanny (we call our beloved mum by her first name) is in her 67th year, and has been a golf-freak since she picked up the game 25 years ago.  When my parents split in the late 1990s, Shan's first call was to Capilano which confirmed she could keep her application in progress despite no longer being married to a member. My siblings and I caught her obsession by osmosis. Golf is the thing we do together.
These days, Shan is a considered a super senior. She has never won a club championship before and did not expect to be in contention at this year's event. In fact the opposite. We joked before the round that we would show ‘em how to lose with dignity.
It’s terrifying to golf competitively for the average person. Like public speaking if you're not used to it. Your stomach churns and heart pounds uncontrollably.
I’ve choked every time I’ve ever played competitively. The consensus is we are a choking family.
While warming up at the course this morning, a competing player’s father approached mom and either put his foot in his mouth or sought to play head games. He reminded her of “choking” in a past seniors event she narrowly lost, and said it would be a shame to do it again.
When I heard what happened I gave him a look of disdain, and said how classy it was, sarcastically.
Mom was rattled.
She blew it on the front nine.
It was a very choppy round.
But she battled back and we were amazed to have a one shot lead on the final hole.
I tried to distract her with golf memories from our life together but she couldn’t escape the nerves.
Mum skulled her approach on 18 into a deep bunker, flubbed her sand shot, turned to me and apologised, looking utterly defeated. As if she owed me an apology.
Her two opponents both now had chances to win. Shanny would have to get up and down from 40 yards to tie if they missed.
Fortunately they did miss. Mom chipped to 14 feet then rolled the put in the back of the cup to roars from the crowd gathered beside the 18th green.
Three-way-playoff here we come.
So exciting!
67 year olds aren’t supposed to be in contention at golf tournaments.
Remember Tom Watson’s historic 2nd place finish at the British Open in 2009 at age 59-among the best golf ever televised. Despite losing in a playoff to Stewart Cink, Watson showed that oldsters can still grind in the right conditions. The ladies first playoff hole was a 450 yard downhill Par 5.
The youngest and strongest competitor was just over the green in 2 shots looking good for birdie.
In a clutch third shot, Shanny knocked a Sandwedge from 75 yards to 10 feet.
On the green, both her opponents failed to convert the birdie.
There stood mom with a ten footer to win everything…
I demurred when she asked me to caddy yesterday. It was short notice and I had a few meetings on the calendar. But something inside told me otherwise.
Walking down the first playoff hole, I was so glad to be there. “We were all winners today,” I cornily said to the players.
As the crowd gathered around the green, I felt them rallying around Shanny. The other two competitors had won before and would have chances again; at her age Shanny may not.
We read the put together and agreed it was straight. “Hard and in the back of the cup,” I said.
The hairs on my neck stood up as she took the stroke.
In what felt like slow motion, the ball rolled in the hole.
I leapt in the air and cheered!
Shan turned to me and asked in disbelief, "Did I do it!?"
The biggest hug we ever shared soon followed.
It was our best bonding experience since my birthday and I almost missed it for a couple Zoom calls.
Mom proved that Humphreys aren’t chokers. And that being there for family is everything.
Not every time has the big payoff. But it’s the day to day—the service I do for my kids; that Shanny once did for me— that makes these moments so special.
Mom’s parents passed away in recent years; they were extremely close to Shanny. Her dear golf pal Monika just died a few months ago. The old guard is ever changing.
Golf is ideal for connecting with all ages, mom shared in her speech. She thanked her caddy too which I appreciated.
A most worthy 2022 Capilano Golf Club Champ she is!
I couldn’t be prouder! 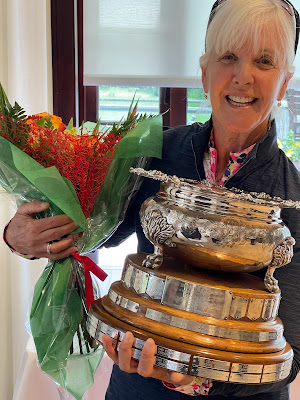 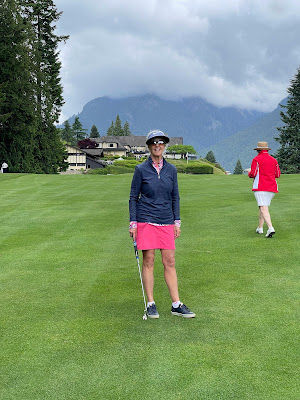